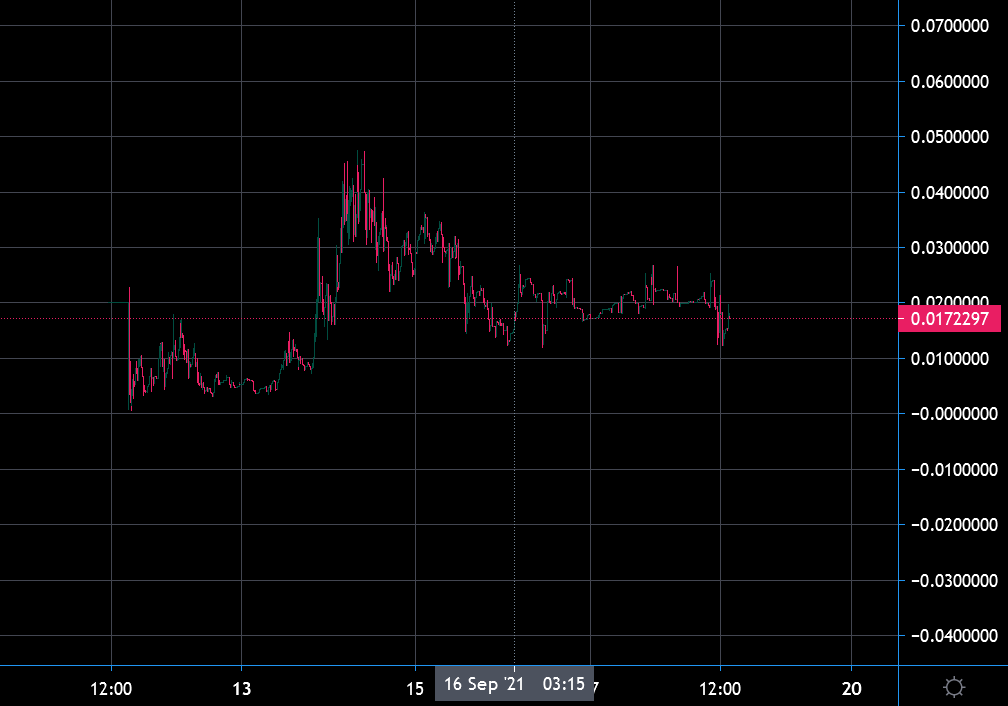 It’s been almost a week since we’ve launched the BUCK token and a little over a week since the inception of this project.

And to celebrate the birth of this blog, I figured it’d be a great time to take a moment and reflect on the rapid progress of this past week.

But first, I’d like to provide some insight into how and why all this even started in the first place.

It was a normal afternoon on Wednesday, September 8.

Arbitrum One was in its infancy (well, it still is, as of writing this), and I was hunting for alpha all across the internet.

I’m not sure whether I was scrolling through Twitter, scraping /biz/ on 4chan, or chatting on Telegram - but at some point, I discovered a new token that was preparing to launch.

I don’t even remember what it was called. Anyway, I joined the project’s Telegram group, only to discover that it was clearly a rug pull.

In fact, the scammers running the group admitted it was a rug pull because they were unable to deploy the contracts on time anyway.

There was still around 100 people in the group, and on a whim, I decided to propose creating another token instead.

I was a bit bored that day and had some ETH already on Arbitrum aridropped to me by Offchain Labs from some developer application I filled out couple months before this, so I figured, why not?

Anyway, people were on board with this idea, and I managed to “steal” almost all of that Telegram group’s members over to a new group I created.

But there was a slight problem: This new token needed to have some utility, or it wasn’t going to last.

I didn’t want to create just another meme coin that would pump and dump, so I decided to build a utility token around a useful product instead of creating an unnecessary product around a scammy token.

So, I was brainstorming ideas with some members of the group, and we tried coming up something that would be very useful yet relatively quick to build.

It was going to be a modern, fully-featured alternative to the lackluster pre-existing Arbitrum charting websites (I’m not going to name any names here).

I pushed some code to a GitHub repository, stuck it on a custom domain, and worried about launching the token later.

I had planned to launch the token on the following day (Saturday, September 11), because I figured the weekend was the best time to release it.

And I didn’t want to wait another week, because what if Arbitrum was already massive by the following Saturday?

Furthermore, I was stuck to a schedule because I had been promising everyone that it would launch at exactly 10 P.M. UTC on Saturday.

People had already marked their calendars, and I did not want to delay the token launch any longer.

So, I stayed up Friday night to work out the details and concluded that there should be a small presale to raise and lock liquidity, followed by an IDO on Sushiswap.

The presale was at 8:30 P.M. UTC on dxSale, because I didn’t have time to create the contracts myself.

In retrospect, this was a horrible idea - especially considering we were the first successful dxSale presale to ever launch on Arbitrum.

But anyway, we set up the presale, and set a soft cap of 3 ETH and a hard cap of 5 ETH.

I just didn’t know if 90 minutes would be enough time for the presale.

Turns out, I was wrong.

The presale sold out in seconds.

And by completely misjudging demand, I may have also overconcentrated a good chunk of the initial liquidity in just a handful of wallets.

dxSale was programmed to automatically take the ETH raised in the presale and vest it for a month on a new Sushiswap pair, BUCK-ETH.

Everyone in the Telegram group was hyped. There were several messages being sent per second, and it was impossible to keep up.

This is where things started to go wrong.

It turned 10, and the pair was now available on Sushiswap.

The price skyrocketed as people frantically bought in.

It nearly reached $0.025 (which would value the token at a nearly $2.5M USD fully diluted market cap). 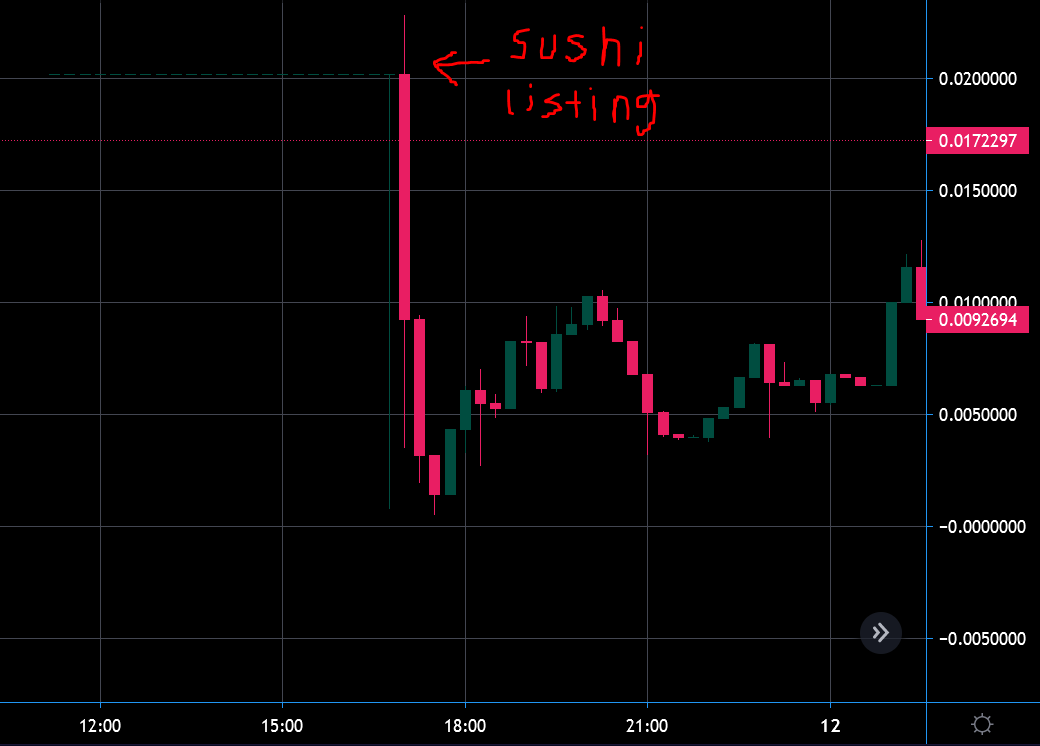 But then, there was a sudden sell wall. Or at least that’s what we thought.

We were using a site called “Defined” to track the chart and order book, because that was the only site with TradingView charts at the time.

So we assumed that dxSale somehow didn’t successfully lock the liquidity and that presalers were dumping.

As a result, people panic-sold.

People rushed to accuse me of being a rug puller and a scammer, demanding a refund.

Meanwhile, me and the advisors were scrambling to figure out what was going on.

It was a complete mess, and as we looked into things, there were a lot of variables involved that contributed to this frenzied launch.

At one point, we even considered re-launching altogether.

However, the price did begin to stabilize and the Telegram group began to calm down later that night.

After a day or so, we finally got to the bottom of it, and it turns out that there were three factors all working together:

1) Somehow, a few presalers were in fact actually able to instantly dump their tokens, but most liquidity did vest successfully.

2) The bug on Defined which I just mentioned falsely signaled a massive wall of sells.

3) There was some botting and automating trading involved at the launch which contributed to some pretty crazy price swings.

We finally got it worked out, and within a couple of days, we actually surpassed the Sushiswap listing price, so everyone who bought at the launch made their money back, so long as they didn’t sell beforehand.

I’m really proud of the drastic recovery we made in such a short period of time. In fact, it was nearly a 50x jump from the all-time low to the all-time high, all just in a matter of days.

I think the key to our recovery was really just doing our best to be as honest and transparent as possible, in stark contrast to the incessant scams and rug pulls in the early Arbitrum landscape.

We even stayed up for hours to answer every single person’s questions and concerns about the launch and about the project in general.

But now that the pilot episode of our saga has come to a more preferable conclusion, we can really focus on building out this project and creating a great product that people really love to use.

This whole site was built entirely from scratch, in just over a week.

And looking back at our progress so far, I’m just really excited to see where this site ends up in a month.

We’ve added charts, portfolio tracking, a real-time orderbook, and all kinds of other features.

We even started working on ArbiDAO, the first L2-native DAO, and Arbucks Pro, a liquidity provision incentive program that unlocks premium features on the site.

We’re also planning a farm where BUCK holders can stake their BUCK to earn rewards (BUCK is non-inflationary, so the rewards will be paid out in a new and TBA token).

Anyway, I found it useful to elaborate on the events of this past week, which has definitely been a blur, at least for me.

And I’m just really excited to start focusing on adding all the features that you guys want to see!

We’ll give our best shot at “winning” Arbitrum charts, analytics, portfolio tracking, and beyond.

Thanks for your time.